Maria M Algotsson took over as branch manager at Assemblin El in Örebro in 2015. She is looking forward to the challenge of getting the staff and the business to grow. ”This is a fantastically exciting job. I am really enthusiastic about leadership issues.”

For Maria, whose most recent position was as project manager and departmental manager at Hifab, it was precisely the leadership role which attracted her to the new job.

- It was a role which was somewhat pushed into the background in my previous workplace. At Assemblin El they wanted to have someone in charge who does a bit more than being involved in projects and managing the details, and as I don’t have an electrical background, that split is quite natural. It means that I can devote a lot of my time to the leadership role and that appeals to me.

The fact that, in her own words, she ”doesn’t know much about electricity” is not something she views as a disadvantage, rather the reverse.

- All the necessary expertise lies with the project managers and fitters. Instead I can bring in new perspectives. You sometimes need to take a new approach in order to move forward.

Nor do her colleagues seem to perceive Maria’s background as detrimental to the organisation.

- I feel that I’ve been received very positively, even though there is naturally still a bit of a honeymoon period. The feedback I am receiving largely concerns the fact that good things are happening and that they are looking forward to change.

So what do you see as your role?

- My role is to have a helicopter perspective, to take an overview and focus on the major factors that can get us to grow. Which market segments and which customers should we work on? What do we do well and what can we develop? What are out procedures like? It can also involve relatively simple things like ensuring that performance appraisals are held. My job is to support the operation and drive it forward. This means that I have to rely to a very great extent on our project managers, which I do. I have full confidence in them. Their expertise is invaluable.

In all there is a team  of around 60 fitters and six project managers working at Assemblin El in Örebro. They are acquiring a manager with a background within the construction industry. It all started when Maria worked in the reception at NCC.

- Several of my colleagues asked me if I intended to study construction and I thought ‘why not?’.

Maria chose to study construction engineering at Örebro University. Immediately after graduating she worked at NCC again, out in production on the contract side.

On the question of whether there are any problems in being a women in a male-dominated sector, Maria doesn’t agree. On the other hand, there are challenges. For example, she feels that over the years she has generally needed to prove herself more than her male colleagues.

- But I don’t want to hide the fact that I like challenges.

She has also always been told that there is a better atmosphere in projects when there is a female involved, that it is more enjoyable.

- Of course, that’s something from which the entire industry could benefit.

Maria emphasises that she did not choose the job because she had something to prove. It’s basically only about one thing:

- I took this job because it is an exciting challenge, because I want to work with leadership and I am really enthusiastic about leadership issues. My aim now is to try to get us to grow. I’m not going to get involved in factual matters and details, but rather provide my colleagues with the right resources so that they can govern themselves in the best way.

She views the fact that she has arrived at a time when there is a lot happening in the company overall as wholly beneficial.

- This is a very exciting period in which to make my entrance, and it is also a part of the challenge. It means that I can be involved in shaping and putting my stamp on the business in a way that wouldn’t otherwise have been possible, Maria says and once again mentions her project managers as key individuals.

- If I hadn’t had them to lean on, things would have been completely different. These are the guys who took over the new systems, who are supporting them and using them to the best of their ability. There is a positive spirit here.

Maria has devoted the initial period in her new job to visiting customers, starting to put routines and organisation in place together with the project managers, trying to learn all the systems, and to holding performance appraisals.

- And I have tried to meet as many of the fitters as possible. I want to spend a few hours of their working day on site. It is extremely important that I know what their working day is like and which jobs they do.

To say that she is busy is an understatement.

- You could put it like this: I don’t need rocking to sleep in the evenings. 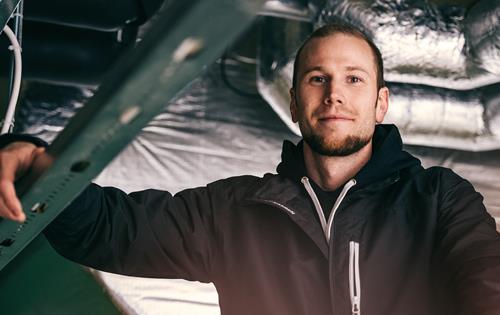 The opportunities for professional development and to advance at work are part of what Marcus Sjögren like most about working at Assemblin.